Hybrid bikes with suspension fork are there to fill a very important gap: the deal with the discomfort of uneven paths. Riding is not fun all the time, at times continuous bike riding can cause serious pains or in some worse cases even injuries due to accidents.

The main reason for that is the uneasiness that is, in reality, the after effect of bumps that come on the way. Whenever a hurdle or bump comes, it causes the bicycle to jump which jerks the rider a little off his or her seat.

Fortunately for us, this issue did not stay for long and was immediately dealt with, when bicycle manufacturing brands came up with the suspension fork.

This suspension fork is now found as a common feature, especially in hybrid bikes that have mountain bike heritage. It is there to absorb jolts, ride smoothly over bumps and to make sure that rider gets a smooth ride even when he/she rides on rough terrains.

You can read more about hybrid bikes here:

There are two parts to any suspension fork that is there to absorb the shock; the first is spring and second is a damper. The spring can be of different materials and all those will be having different spring rates as well. It could be associated with compressed air, titanium coil or elastomer.

Spring rates are important because they greatly affect the functioning of the fork. Coil spring forks maintain a steady rate throughout the journey whereas those that are air sprung gradually increase its rate as the ride proceeds. Titanium coils may be lightweight and thus manageable but they come with an increased cost.

Among all the types, air spring is considered to be the best. The spring rate is very easy to adjust by just altering the air pressure.

Talking about damper, it can be changed according to the rider’s height, weight or even the terrain of landscape. Damper becomes necessary because, unlike rigid fork, it gives much more control to the rider.

Who are These Bikes For?

Hybrid bikes with suspension fork work perfect for mountain riders as the terrain that they have to ride on gets bumpy quite often. There are further two options for the type of suspension that the user may want, relative to his or her travel.

There have been recent improvements in the fork style which makes it of even more use to the bikers.  Now, bikers can easily adjust the travel by adjusting it to the kind of terrain. The users can easily lock the fork when they have to travel on smooth tracks.

The amount of travel has also been increased from 80-100mm to now 200 mm travel, even on the roughest terrains.  Speaking of gaiters, it is that part of the fork which prevents dirt and water from harming the suspension system.  However, now with the advent of dust-wipers, gaiters are not that that popular.

Nowadays, many of the hybrid bikes that we see come with suspension forks to ensure smooth and trouble-free travel. Brands cannot ignore this technical feature because now it has become more of a usual thing which is why its absence will reduce the demand for their product. 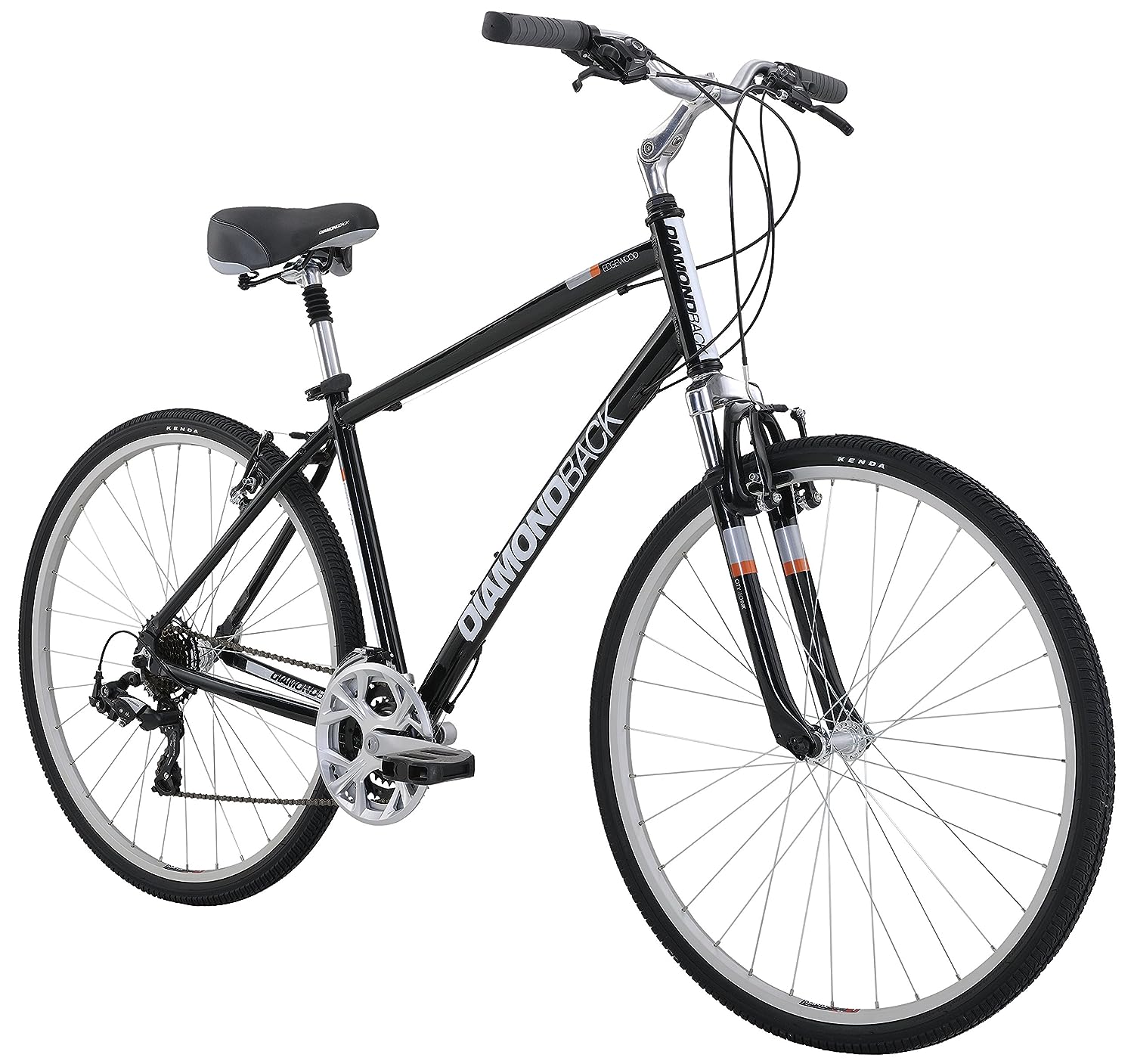 One of the best and highly rated hybrid bikes with a suspension fork. This Edgewood hybrid bike comes between a price range of $250and $350. It is ideal to give the rider the most comfortable ride. It comes in four different sizes to suit the different heights of the riders. The frame of the bike is built with good quality aluminum and comes with a hybrid suspension fork which ensures that the ride is smooth and comfortable.

A good thing is that most of the bike parts will already be assembled and the user will only have to attach the handlebars, tires, and pedals.  It gives the rider an upright position so he/she doesn’t feel any pain. The customer reviews, however, were not that pleasing as only 43% of them gave it a full 5 star review.

The users were happy with frame, adjustable handlebars and tires but many things were not up to their expectations. There was no kickstand and the pedals had to be replaced. The bike was satisfactory overall, but it needed tuning and maintenance. 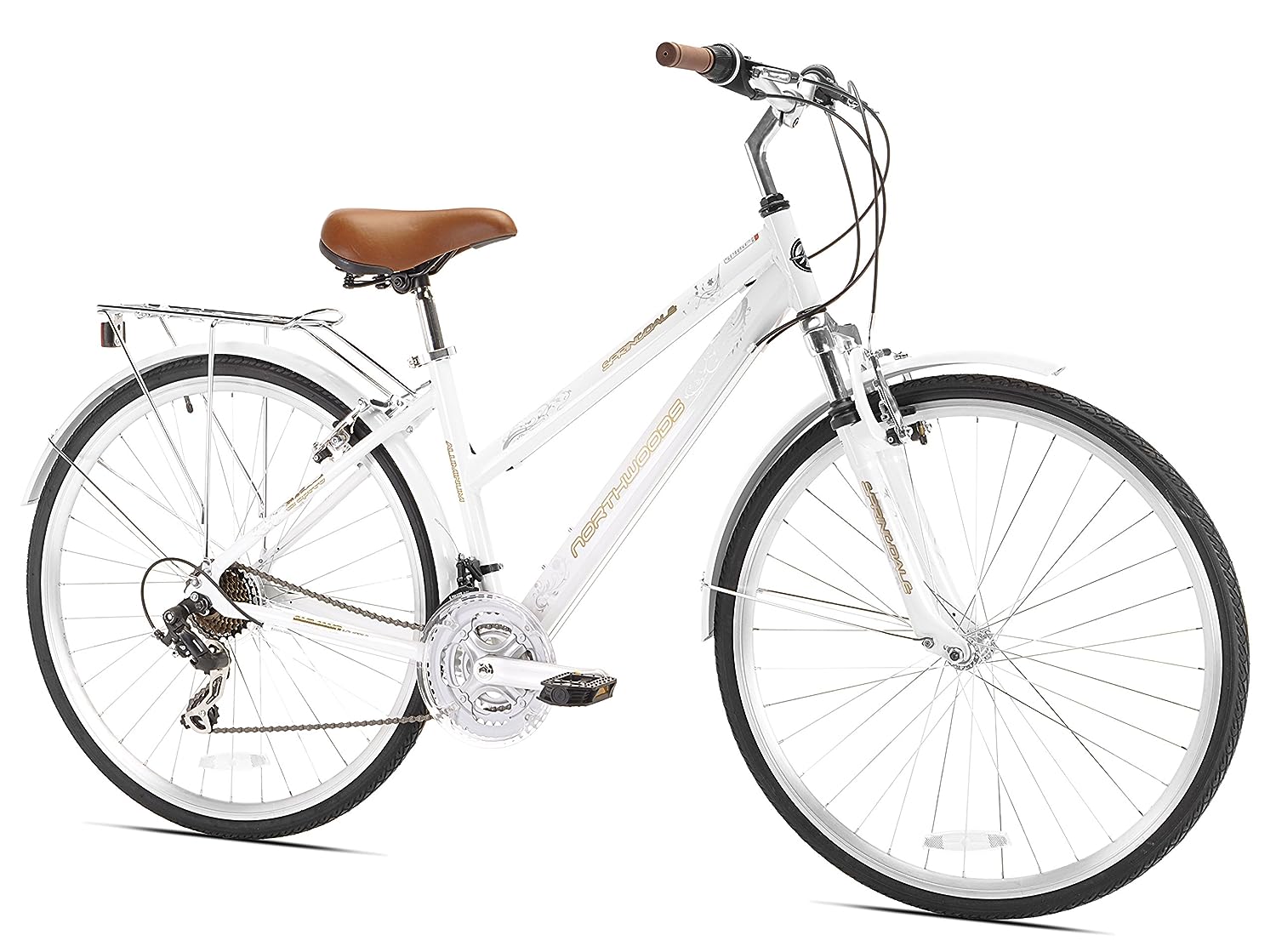 This women’s hybrid bike with suspension fork by Northwood comes at an affordable price of $189. It is a comfortable bike that gives the user an upright riding position. It is built from a lightweight aluminum frame which makes it easy for the user to change places of the bike.

The 700c wheels are the standard wheels that are used in most of the bikes and have perfect thickness. Rims are made of alloy and the brakes are the linear-pull type. This bike is great if anyone wants to use it for recreational or commuting purposes. The users who bought were happy with the cute outlook of the bike, some of them even put a basket in front to which further enhanced its beauty.

The issues that they had were mainly the brakes which made squeaky noises and even affected its functioning. Rest of the complaints were related to bad shipping in which either the bike was scratched or some of its components was damaged. For some, the installation process was difficult as the instructions which were given were not clear enough. All in all, 45 % of the users gave it a full 5 star review and rest gave it either 4 or 3 star reviews. 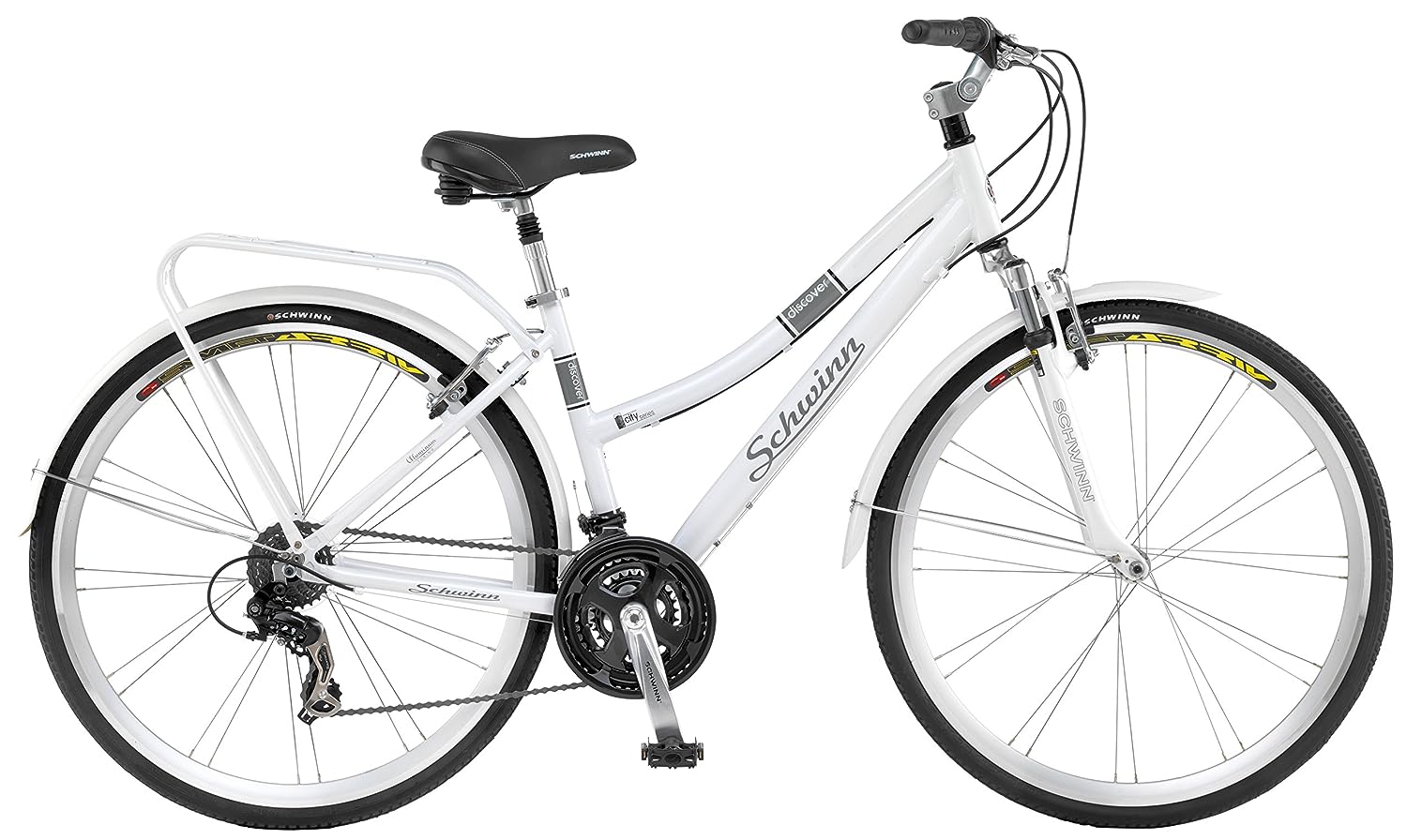 This bike by Schwinn is manufactured exclusively for women and comes at a price of around $257.  It is a hybrid/comfort bike that has an aluminum frame. The suspension fork is itself from the same brand. 21 SRAM grip shifters are there to provide multiple speed options. Brakes are liner-pull type made of alloy.

The handlebars have an upright position with padded saddles to give full comfort to the user. This bike gives the rider an upright riding position so she doesn’t feel any pain while riding it and with an easy shifting of gears, there is no risk of accidents.

The people who bought were extremely satisfied and due to this about 60 percent of them gave it a full 5 star review. It has multiple gear options and mudguards.

To complement the female interests, a cute back rack has been installed. The look of the bike is pretty good too and looks great in white. When they rode it over bumps, the suspension system worked great on it. The weight of it was lighter than many of the mountain bikes that riders had and overall the bike was great. 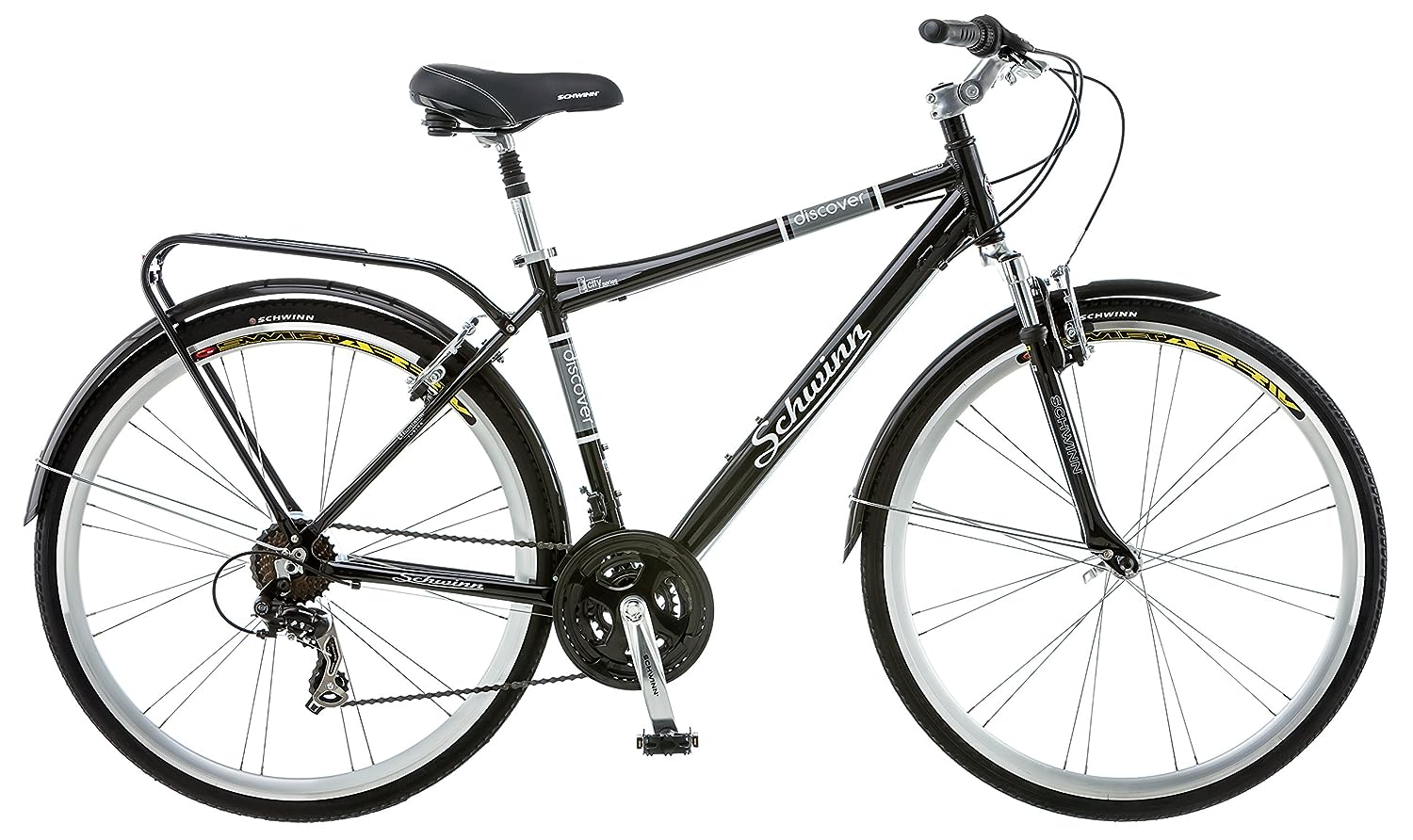 Schwinn has made this hybrid bike targeted at men only. This trendy bike comes at a price of $329. The frame has been made of aluminum and the crank of an alloy. Suspension fork in the front is there to absorb shocks and make the ride smoother.

Similar to Schwinn’s women hybrid bike, this too has the 21 Speed SRAM grip shifters and linear pull brakes. This bike is ideal for men to go for a casual cruising or even going for work. The classic look of the book and color combination is such that it will go perfectly with any of your outfits. Also, buying it from Schwinn ensures you that it will have a lifetime warranty. Among the people who used the bike, 52 percent of them gave it full 5 star reviews.

Many of them were of the view that when they first had a look at the bike it didn’t seem as if it would have plenty of features. From the suspension fork to the 21-speed option grippers, everything is perfect. It is great even if the rider has to haul a few lightweight things.

The only problem they faced was generally with the assembling in which either clear instructions were not given or just some screws were missing. Other than this, many of the people appreciated the effort that was put by Schwinn in this hybrid bike with a suspension fork.

These were few examples of hybrid bikes with suspension fork which have a suspension fork system and are quite famous among users as well. Riding is not the only thing bikers should be concerned about; they should also maintain their bike which calls for special maintenance for this fork.

The stanchions should be kept safe from scratches as it can harm the dust seal which eventually brings down the life of the system. A mild cleaning solution should be kept at all times so that after every ride, you can clean it with a cloth. Since these are expensive to get replaced after every now and then, so it is advisable to have it maintained throughout so the life of the suspension system also increases.

Problems like oil leaks, air sprung releasing more air than usual and weird noises due to clanking should be immediately dealt with. Regular maintenance will only make your bike function well in the long run.