Let us compare Touring bike vs Hybrid Bike. Touring Bike is a special kind of a road bike. Just similar to road bikes, these too are designed for longer distances. However, the gear range is lower compared to the usual road bikes. This is so that they can carry heavy loads on higher lands without any trouble.

Even though they can be associated with a road bike, they still have a much relaxed riding position because the seat is situated on an equal level to handlebars. These bikes are much more durable and have the strength needed to carry heavy loads.

Hybrid bikes are more of a luxury line of bikes. They give riders the comfort they had always been looking for. They are mostly used on city roads but can also sometimes work on light off road use like smooth dirt trails.

In today’s bicycle market, cyclist’s requirements are met by multiple options. Hybrid bikes are trending for fun and recreation. While touring bikes, on the other hand, are being picked for long distance riding. While these two have similarities and differences, the two shine in their kind.

There are some hybrid bikes called Trekking Bikes that are more inclined towards touring bikes regarding feature. A detailed comparison on touring bike vs hybrid bike, however, is going to place the two on the same pedal so that riders get a clear picture when deciding to buy between the two. 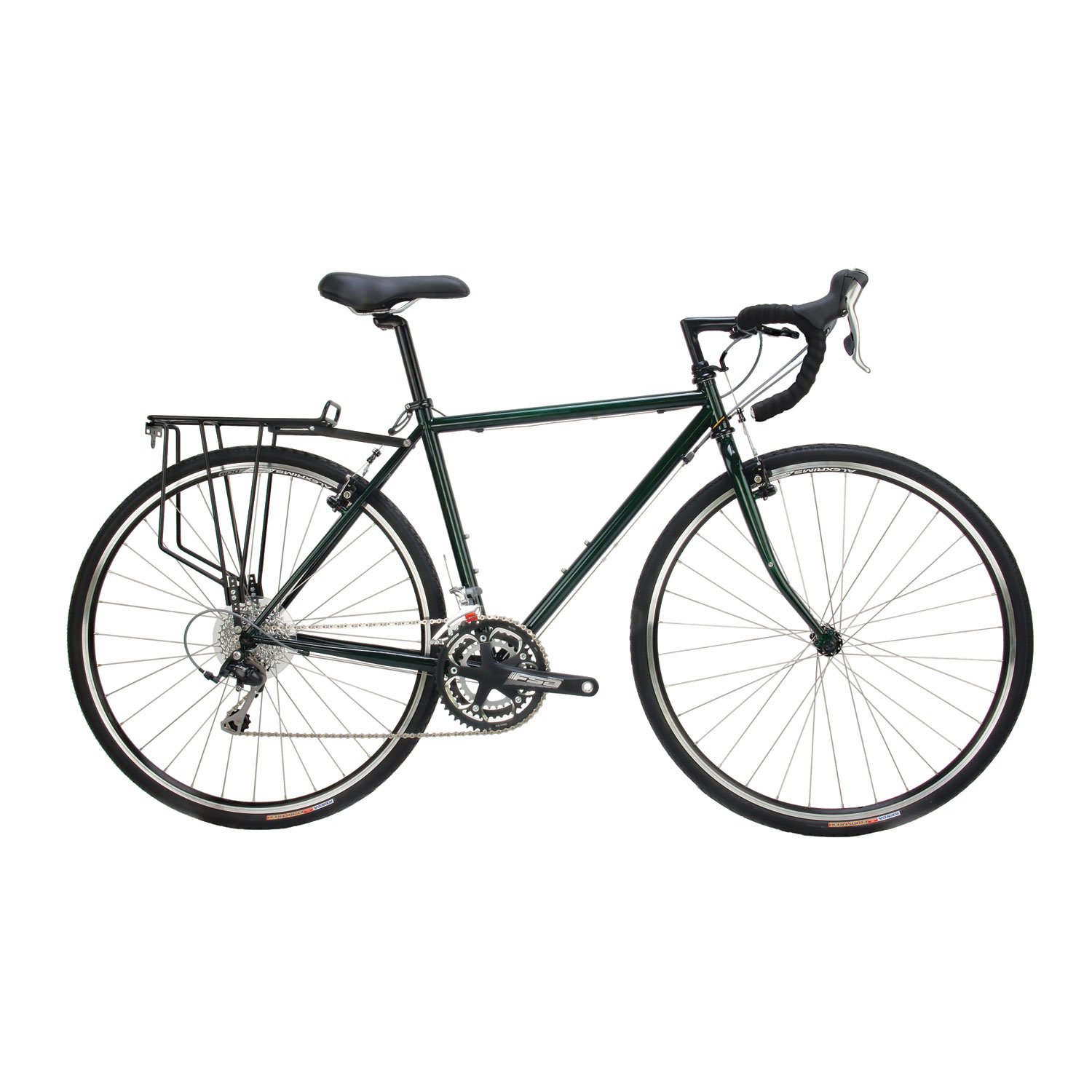 Let us now compare the two bike types. Since hybrid bike encompasses features from several bikes, you are bound to see some similarities in both bikes. At the same time, touring bikes are specialized bikes, whereas, hybrid bikes are general purpose bikes. Therefore, expect differences in both.

The wheelbase of a touring bike is long, and the drop handlebars provide stable steering for the rider. The whole frame has multiple attachments like there is one for a water bottle and other for luggage racks, fenders, tools and other spare parts. Luggage bags (small) can be attached to both the front wheels and at the back of the frame.

Hybrid bike, in comparison, has a narrower frame. Since the bike is designed to give comfort and only fit for short distances, it does not have many places to attach luggage bags and other items. The most that it can give is an attachment for a water bottle and lighting.

Hybrid frames are made from high-end steel which is durable. In some frames, aluminum can also be used and carbon fiber too but this particular material gets expensive which is why it is not used that often.

Hybrid bikes have wide tires made from smooth rubber so that it gets a good grip on the ground. Wide tires may be good for grip, but aesthetically they don’t look good in appearance. These types of tires are less likely to get flat and weigh more than other tires. Hybrid wheels are usually 700 CC and because of their weight cannot function well at great speeds.

Touring bike wheels are made from incredibly durable material so that it is easily able to move on rough terrains, without the tire getting flat or just bursting in a worst situation. Double wall rims are used which can be 36 or sometimes even 48. The width of these tires is usually 26 inch and fall in ISO 559, which is a category of tires.

Hybrid bikes provide a lot of options for gearing. There are different selections for different kinds of hybrid bikes, for example, if you want to ride on flat roads then you will not need that many gears; a 7-8 speed would be sufficient. On the contrary, if you want to travel on slightly rough terrains then more gears will be preferred with speed of 24 to 27. The shifting of gears is super easy these days, in hybrid bikes, there are two options to choose from; the twisted gear or the push button option.

Touring bikes use derailleur gears that are low gears fit for steep hills. The gears move smoothly even with carrying a load. Usually, bikes have two chainrings, but touring bikes have triple chainrings. They have a large speed range from 23 to 96 gear inches.

Moving ahead of this range now you can even find 18 to 104 gear inches in recent touring bikes. In place of the derailleur gears, now internally geared hubs are starting to get common because they have a stronger chain system and gears aren’t duplicated as it was in derailleur gear.

Pull V brakes or disc brakes are the most common ones in hybrid bikes. V brakes are designed for a steep and rough terrain, so this will be utilized in mostly the best kind of hybrids.  Disc brakes, on the other hand, are used in hybrids that are built mainly for recreation or smooth riding.

Touring bikes usually have linear pull brakes or cantilever brakes. Sometimes disc brakes are also used because they have a better grip in muddy conditions. However, the repairing of disc brake can be difficult at times.

As it was mentioned above that touring bikes can carry a lot of weight like luggage etc. , to compete with this feature hybrid bikes come with a lot of options for multiple accessories. For instance, you can find a basket in front that will look aesthetically lovely and will improve the appearance of your bike. Sometimes you can even get safety helmets along with hybrid bikes and other than this they have a huge list of accessories that you can buy separately.

As far as the topic of Touring bike vs Hybrid Bike, reading customer reviews is most useful when you want to know which is going best in the market. Between these two bikes, comments were mixed regarding them. Some people preferred hybrid whereas some like touring bikes.

Hybrid bikes were sometimes preferred because they were more affordable than touring bikes. Touring bikes were bought and liked by users because of the strong quality of tires and their good ride on even rough surfaces.

Drop bars were another huge positive of a tourer; people were easily able to change their hand positions when in fatigue or when having windy air. All in all, people were of the general view that hybrid usually is a compromise for all features and it isn’t known for excelling at one particular feature whereas touring bike is durable and reliable both.

There are still different kinds of hybrid bikes that people can choose from, and manufacturers are working hard to bring them up to the desired level.